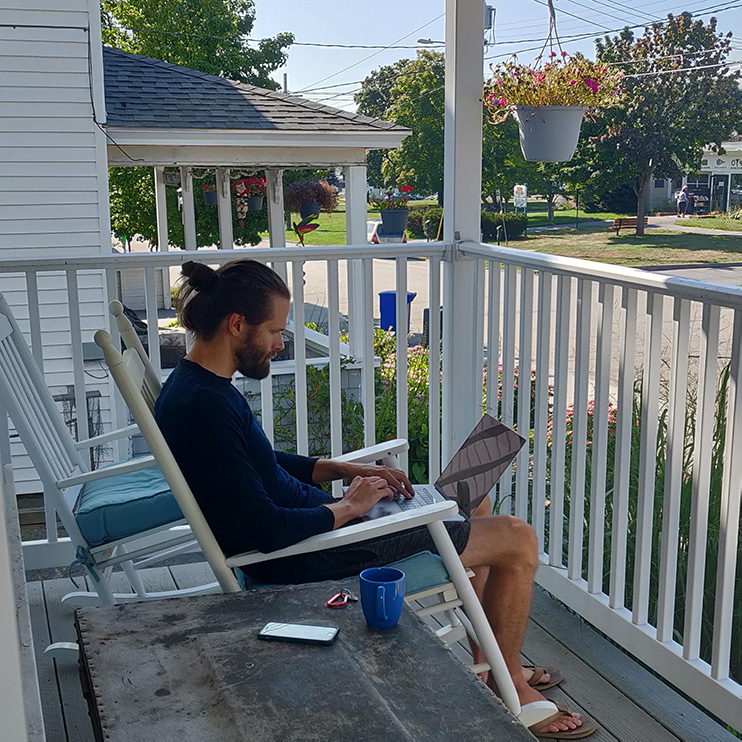 Jean-Denis Caron and his family were still reeling from his brother-in-law’s cancer death when Covid 19 began its dangerous spread around the world. He had felt “completely helpless” watching the young and healthy Marc sicken despite doctors’ best efforts, and Jean-Denis, who goes by JD, felt that he could not stand by as a pandemic raged.

“I didn’t know exactly what to do, but when I saw a tweet from (C19 Founder) Eric Ries asking for help I jumped on it. I didn’t want to be a bystander of this potential crisis.,” he said.

Marc’s death shook my world and my family and opened my mind to how much we have yet to learn about biology and respect the power it holds.JD Caron, C19 Coalition Volunteer

The C19 Coalition uses JD’s work as a software developer to make the website more user-friendly and help it better serve our partners in the sourcing and distribution of personal protective equipment during the Covid-19 crises. JD’s latest project follows up on earlier C19 projects where he made the directory interactive and responsive, with improved search features.

“I stayed out of the details because we didn’t know back then how long the crisis would last,” JD said. “Then during the summer the marketing team requested a blog on the website… I also stayed around for general support, I think that just saying that I was going to stick around for as long as needed relieved the pressure and helped people focus on different problems than the website.”

The “power and complexity” that biology and the nature hold has left a huge impression on JD.

“I did respect the potential the crisis could have and how harmful the virus could be for some people. Marc’s death shook my world and my family and opened my mind to how much we have yet to learn about biology and respect the power it holds. I started to read about the COVID crisis before it hit America and understood very well that viruses are powerful forces that can greatly disrupt even a modern civilization.”

JD is known around C19’s Slack channels as being a man who gets things done, and that goes for his personal life as well. JD and his friends enjoy skating, and JD created Rollance, which makes an accessory  for inline skates. The sport has a small but devout fan base.

“If I don’t make this product (and the company that makes it) it might never come to the market. It’s very subtle but I am creating a new cultural sport product for the people of the North, for those who like freestyle physical activities but also love to skate. It’s weird to explain but I love this concept of being the creator of a potentially cultural product.”

The project involved “a few imperfect frames,” he told BigWheelBlading.com, and took a toll as he realized the financial and emotional commitment it would require. “But I’m having a blast doing it,” he said.

How did Rollance prepare you for the uncertainty of the pandemic, and your role with C19 Coalition?

Many things in life are similar and this is no exception. I was well prepared for fuzzy states and pressure being applied, by myself or others. That is why I trust the process and I clock off systematically when it’s enough for my brain or body, even though there’s more work to do. Because in a new venture there’s always more work to do but you need to protect yourself from burning out. It’s a challenging mental situation to know that you could do more but you need to rest and enjoy your day a little. I also was well prepared to work in an environment where not everything has been defined yet and you need to be able to cope with the lack of clear guides.

What’s next for Rollance?

As for improvements for the Rollance project, there are some. I have a backlog of 7 pre-orders but I never managed to craft the new mold for those orders. During fall of last year I jumped on a plane to visit my sister for as long as needed to help her out of the crisis she was in. When I came back, I took a few months for myself (no side project) to cool off. Then COVID hit, since then I moved my focus to this crisis. I didn’t expect the virus to last as long but I’m sticking by the Coalition. There are things in life that matter much more than others and being flexible on your priority is important. I love my project but one more year won’t kill it, this crisis is much more important to focus on than my project. When you build things for the long term, you can manage to take a break and come back to it without killing it. It’s also a state of things I’m used to coping with, I’ve been running this side project for so long now. I’m used to showcase a result even though it’s not perfect because that’s all the time I have for now and the season is knocking at the door. It’s that or nothing and I prefer showing something imperfect because it’s still gathering feedback, enthusiasm and comments.

Is your life different during Covid than before? How?

My life isn’t that much different than before because I was already working from home. I have been fully remote for my client for more than two years now. What changed the most is my girlfriend joined me full time at home once the government switched their office workers to remote. It allowed me to spend more time with her. It’s outside of work that changed the most. At the beginning of the crisis, we avoided going into indoor public spaces for a long time and even got our groceries shipped. We avoided all social contacts and respected the long list of rules our governments put in place. At one point it became quite difficult, we started doing social meetups on video conference applications with friends and family. What changed the least is the amount of time I spent outside. I still go out for my runs, hiking, skating sessions and cross-country skiing. It was much needed to let out the stress. I miss hockey a lot, I can’t wait to play again with my friends.

Do you have any call to action for the readers?

I invite people to adapt their behaviors to this crisis. There are ways to change what we used to do but in a safer way that is also enjoyable. Like, meeting your friends outside instead of inside. Making sure you at least get out of the house for a walk if you are stuck at home. If we have more people staying safe and taking care of themselves, we are going to have more people healthy in every way during the crisis, and after.

Exhaustive list of behavior changes from the CDC (Centers for Disease Control and Prevention): Daily Activities and Going Out.

If you are interested in joining JD and volunteering in any capacity with the C19 Coalition, reach out to us at info@c19coalition.org.