Adaptive Energy Pivots and Steps Up for COVID-19

As soon as Covid-19 washed over the country and caused devastation to individuals and businesses at historic levels, Ranvir Gujral needed to do what the name of his company Adaptive Energy suggests.

If it didn’t, the fuel cell company easily could have met its match.

“Overnight we lost two-thirds of our revenue and we were severely impacted by Covid-19 like everyone else,” said Gujral, who serves as chairman of Adaptive Energy. “We were clearly in danger of being hurt.”

Initially, many of the employees had to be furloughed. It was a tough reality that sat in front of him. And because his company supplied defense communications, it was mandated to stay open by the military.

After getting over the initial shock, Gujral paused briefly then looked for a silver lining.

“We had 50,000 square feet of manufacturing space that wasn’t being used to capacity, I had a staff of Ph.D. minds, and a highly proficient production team,” he said. “I just looked around and said, ‘Gosh there has to be something we can do?’”

Adaptive Energy has become a leader in the COVID-spurred resurgence of American manufacturing.Joe Wilson, co-founder of C19 Coalition

Initially, he just wanted to see if Adaptive Energy could make the much-needed PPE products such as hand sanitizers and face shields.

“On Saturday night we told everyone what we were up to, and by Monday we got responses from FEMA, state governments, and first responders desperate for help way beyond what we had,” he said. “It was clear we were merely putting a dent in what people needed and had to ramp things up.” 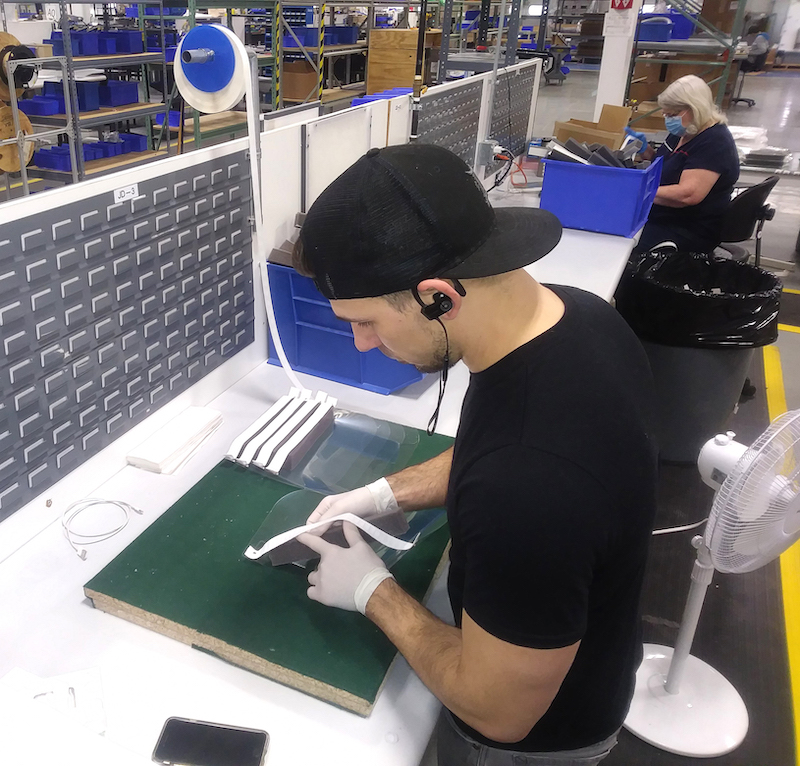 Quickly his facility and staff turned into a full-tilt PPE operation. Two weeks after they were furloughed, all his employees were rehired and his company was turning out production as fast as it could.

Among the first emails was one from the C19 Coalition, which gave Adaptive Energy the support and connections to various non-profits that it needed to make sure the PPE was made and ended up in the hands of those in need.

“Adaptive Energy has become a leader in the COVID-spurred resurgence of American manufacturing,” said Joe Wilson, co-founder of C19 Coalition. “Earlier this year, Adaptive pivoted operations to produce and ship critical PPE to frontline workers and essential employees. The C19 Coalition is proud to call them a partner.”

Since it started in late March, Adaptive Energy has produced or distributed more than 11 million pieces of PPE. Its biggest customers are New York and California which purchased large volumes of isolation gowns to direct to hard-hit hospital systems.

Additionally, while a lot of the need was for container size loads of PPE, Adaptive Energy realized there are smaller practices that need help as well. To help here, Adaptive Energy created an e-commerce store at arboraphothecary.com where they sell PPE items such as hand sanitizers, gowns, masks, and touchless door openers.

Because Adaptive Energy operates Arbor Apothecary as an incremental business, its revenue targets are softer, which allows the team to offer deep discounts and no-cost products to customers in dire need, including nonprofits, private citizens raising money to purchase PPE to donate and others who just can’t afford the PPE they need.

Like everyone else, Gujral hopes that the Covid-19 impact will subside and things can return to normal. Long term he plans to manufacture PPE items alongside its fuel cell business.

For now, he hopes people and companies continue to team up and help solve this PPE problem. He’s witnessed those trying to take unfair advantage of the dire situation through price gouging and counterfeiting but hopes the best of humanity like what C19 Coalition and Adaptive Energy does wins out.

“I think in the end, there’s a strong desire from people to help,” he said. “It’s refreshing when you see people drop everything they can to get PPE in the hands of people that need it the most.”

Adaptive Energy asks for help to connect with people and institutions that need PPE help that it provides. Inquiries should be directed to the Arbor Apothecary Website.

The C19 Coalition is a non-profit, cross-sector group of more than 20 organizations, companies, states, and philanthropists working to address PPE shortages across the country.